To win, or even finish in the top few positions at the June Sprints® is an achievement that many drivers strive for but few accomplish. In addition to prizes of cash and merchandise the most coveted award is the custom designed wooden plaque that is unique to the Sprints. Except for a few years, since 1982 Chicago Region has presented winners and top finishers with laser-crafted pieces of art designed by noted autosport enthusiast and artist, Jim Swintal. Four designs were created by Jim exclusively for Chicago Region and the June Sprints, and have been recycled many times. The original four are displayed here.

The club recently had a chance to interview Jim Swintal about his motorsport experiences and how the development of the four original June Sprints trophy-plaques came about. Jim joined the Chicago Region of the Sports Car Club of America in 1980. At the time he was a full time architect who enjoyed volunteering for the SCCA as a Corner Marshal and working with Competitor Services. His skills as a sketch artist were noticed by club members and before long he was lured into providing drawings and sketches for Piston Patter, Chicago Region’s monthly newsletter. He was also asked to sketch portraits of winners of the Region’s Dave Morrell award, given annually to the Region’s Worker of The Year. As fate would have it, he did so well that he found himself having to do a self-portrait when he was honored with the same award in 1982.

Paul Zimmerman of The Motorsport Collector was impressed with Jim’s abilities and suggested that if he would do some motorsport drawings he would sell them in his store. The drawings became extremely popular and noticed by many in the motorsport world, becoming a stepping stone for Jim to move on to bigger and better things. Later, Jim found himself working primarily for Champ Car, today Indy Car, where he remains creating exciting and memorable moments from that series. Jim’s artwork can be seen at www.jimswintal.com

Chicago Region has asked Jim to create four new designs to be used exclusively for this and the next three June Sprints trophy-plaques. Jim says that he wants to blend the Old with the New and show how the track, the drivers and their cars have evolved over the last six decades. This year the track’s beloved original Pagoda building with its unique corner roof tops is compared to the new Winners Circle facility which shares some of the Pagoda’s historic roof line. The beautiful artwork is shown here, lasered onto solid wood. 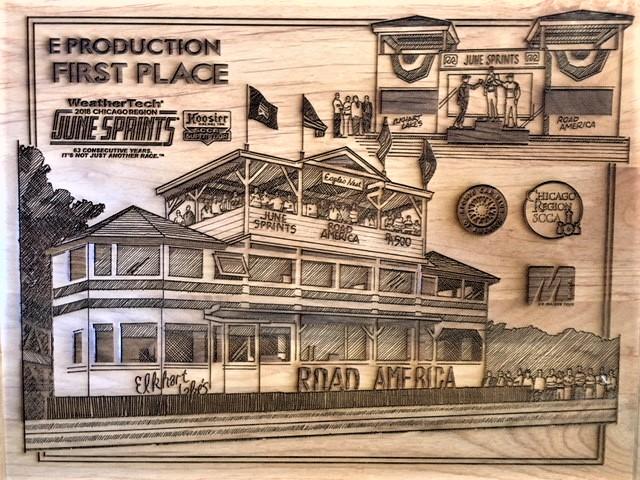 Jim is committed to developing three more designs which will look at drivers, mechanics and the fields of cars that have challenged the famous Road America race course. They will be revealed over the course of the next three June Sprints.

While most June Sprints drivers will not be lucky enough to take home one of Jim’s coveted wooden pieces of art, each of them will be given a Jim Swintel masterpiece, silkscreened onto the front of a complimentary T-shirt given to them at Registration.   Last year Jim began creating historic scenes associated with racing at Elkhart Lake and Road America. The first of which was of a McLaren Can-Am car passing the Pagoda. Over the course of the next six years Jim plans for his series of collector shirts to illustrate such things as the old Bill Mitchel Bridge, the Silo/scoreboard, the original road course through Elkhart Lake with cars passing Siebkins, and more. The end of the series will coincide with Chicago Region’s 75th anniversary in 2023.

It is often pointed out that the prize for all the hard work and expense associated with winning a SCCA race is just a, “$10 trophy”. The June Sprints is an exception to the rule. The winners (and podium finishers) of the June Sprints literally receive a limited-edition piece of original art, unique in all of motorsport, to display and demonstrate to the world that they took on the best racers in the country and were crowned Champions.

Editor’s Note: Author Jim Marinangel, a 30 year SCCA racer, has won four June Sprints in the Spec Racer class collecting each of Swintal’s four original designs. Having just retired from racing, Jim says his only regret is that he won’t have a chance to win any of Jim Swintel’s coming plaques.